The new routine around here gets us up and ready for work and school way too dang early (!) but also at staggered times. A bit over an hour after Mister Soandso and Middlest leave to get her to high school, I stand at the window and watch Littlest walk to the bus stop.

It’s our first week of school and already he’s got a system: eat breakfast, get showered and dressed, and head out the door all with limited interaction with me. He’s never been a super chatty morning person, but even for him it’s a bit muted. Not in a rude sort of way, but more in line with how he interacts with the pets – sort of a quick acknowledgement and then a “bye! Love you!” thrown over his shoulder as he head out the door.

Sounds like I’ve got a middle schooler on my hands, 100%.

After the door lock clicks, I refill my coffee cup and the dog and I head into my bedroom where the window affords me the best view. It takes a while for him to come into view, and then, after a short walk up the hill, he disappears. At no point does he look back over his shoulder – why would he? His destination and friends are ahead of him. And he knows how to get back home when it’s time to do so. 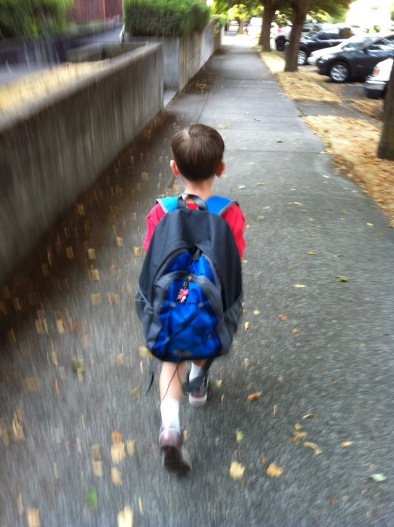 This photo of Littlest popped up on my FB feed this morning. Seven years ago Mister Soandso and I walked him to his first day of kindergarten.

He didn’t look behind much even then. He knew where we were… right behind him should he need us. Plus, he knew he had free reign until he got to the corner where’d he need to wait for us and the crossing guard. He knew how to do this trip.

After all, his dear sister was back there with his dad and I, and he’d made this trip with her too many times to count in his life.

Seven years and now that little boy is gone. That too big backpack wore out years ago, he’s favorite tee shirt has long been outgrown. And those tiny running shoes he was so excited to get have been traded in for 8.5s in adult size!!!

The young man I watched walk to the bus stop resembles this tiny boy so much, and yet very little. His voice proves adulthood is around the corner even more than those big shoes do. And his fierce independence seems to demonstrate how grown up he is as well. Except it doesn’t.

Instead, it reminds me that he has always known where to find his dad and I – behind him, watching his back while giving him the space he needs to become the person he will be. And g-d knows, we love that person so much.

Welcoming a child into your life is always a scary thing – and Littlest’s entrance to our world was not without drama. Oy. But in the big picture, journeying with this young man has been such smooth sailing. Or, maybe the joys have just so outnumbered the challenges that I rarely think about the scary stuff nowadays.

A friend’s baby came early this past week – his little boy was born at 24 weeks 5 days and weighed only 1.9 pounds. So far, little Will is doing well. Every photo his parents share is a reminder of just how precious and tenuous life is. And how very lucky Mister Soandso and I were to have three full-term babies.

Our babies start out so very vulnerable and need so much. And then in a blink of a proverbial eye, they put on their backpacks and head off to kindergarten.

Yep, the days are long but the years are so very short. And then they are off, going their own way.

4 thoughts on “Going His Own Way”