Next week we take Biggest to college. I can’t believe I’m typing those words, but my lack of belief doesn’t change reality. Biggest is off to college.

He was an 8 year old, third grader when I started this blog. Back then, my role in his life (and apparently mine as well) was to have all the answers to all his questions. (See my inaugural post for a refresher of how well that went for me.)  These days as a whopping 18 year old, he prefers me to keep my obviously lacking “opinions” to myself and just drive the car in silence, thank you very much.

As the hours creep closer towards Monday morning, I am reminded that not only am I no longer needed to answer his questions about life or whatever he is currently curious about, I am no longer the center of his universe. And actually, I really never was in the same way he was mine.

He is my son. And I have found myself standing in his shadow for so very long.

Our family has recently returned from a grand adventure – our last family vacation as a family of five, three of which are “children.” Because we all know that once a teen leaves home, they don’t come back as simply your children. Once the pandora’s box of adulthood opens, it never quite closes – even if they come back home, they and the family dynamics are forever changed. So off we went, one last time as the family we had evolved into, and before we evolve into the family we will be. 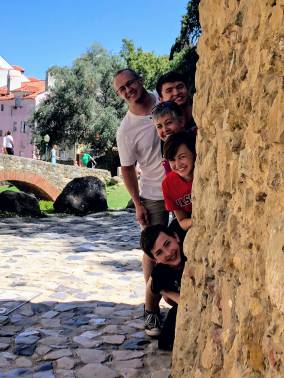 Two weeks, first to New York City and then to Lisbon, Portugal. (If you are a Northwesterner, I highly recommend using a city on the east coast as your point of departure to Europe – or reverse if you head to Asia, etc. Ticket prices are much more affordable.) And while NYC was exciting and, well, NYCish, it was Portugal that was the magical part of our trip.

There was a heatwave while we were there and because of those 106+ degree temperatures, finding shade and air conditioning became paramount. And because of that, we learned a charming Portuguese turn-of-phrase. Instead of standing in the shade, people stand in the shadow. All around places of interest, castles, museums, plazas, even the corner pastry shop, people found themselves huddled in the shadow. And huddled there, strangers found conversations that started with grumbling about the heat but then turned into more substantial exchanges. Standing in the shadow became one of my favorite bits of our travels.

Stand in the shadow.

Such a charming translation, shade versus shadow. And now that I’m home, those four words keep coming back to me.

Standing in the shadow.

Many of my friends, in real life as well as digitally, are sending our children off to adulthood this summer. We’ve spent so many years preparing our children for this moment – this jump into the waters of adulthood. It is a preparation that is much the same for all of us, although each of our children requires slightly different last minute preparations. Some of these children are off to major colleges far away from home, some are off to community colleges or the workforce and trading good grades or behavior for room and board. And Biggest is off to a college nearby but living on campus.

So many parents I know, shopping for extra-long twin sheets and whatnot. Stockpiling tissues – not just for their children about to launch from the nest, but also for their own private tears.

We’ve prepared them to leave, but what have we been doing to prepare ourselves? Where is this chapter in the baby books? What to expect when your shadow, the one that you’ve chosen to huddle beneath is about to be gone?

Being Biggest’s mother is and will always be one of the most life-altering events for me. Not only did he make me a mom, but he made me rethink so many things and not just because he asked me so many questions for so many years. He’s broken my heart and healed my soul. And most importantly, he made my heart grow so many sizes larger…for Mister Soandso, Biggest, Middlest, and Littlest, as well as for all the many young people I’ve met because he brought them into my life.

I’ve been happy standing here in Biggest’s shadow but I’m happy that his shadow is leaving because that’s what I did when I became his mother…I grew a person strong enough to cast a long shadow, but also strong enough to leave my side. I’m sure he’s going to be just fine.

I’m not 100% sure how I’m going to be – oh, I’ll be fine. I will miss him and miss our conversations in the car. But I’ll be fine. I’m just not quite sure who I am going to be as the parent of a newly minted adult. This is uncharted waters for me and the only thing to do is climb onboard of my raft and figure out how to paddle – hopefully in the direction of some destination more enjoyable than dangerous.

I guess if I were to write that missing chapter for my old copy of What to Expect When Expecting, I’d pen something along the lines of “these are going to be the days that make you simultaneously weep and smile…you aren’t losing your mind, you’re just standing between 2 worlds!” or, if I’d had a glass of wine before writing, something more honest like, “Some days are going to nearly suck your soul right out of you. But when you sneak in and tuck the blankets back around that obnoxious teenager, you’ll fall in love all over again and all will be fine once more.”

I’m going to be fine, standing outside of Biggest’s shadow. Just like he’ll be fine finding his own place in the sun.

And besides, I’ve got two more shadow-casters still at home.

*Dear g-d, Middlest starts high school in 2 weeks. And my baby will be in 7th grade…and is nearly as tall as me.

2 thoughts on “Standing In the Shadow, part 1”