I have a few things rattling about my brain this morning and so I’m not sure how they will come out, but I know they need to come out. I’m pouring myself another cup of coffee and hoping to compose myself and my words enough.

It is an interesting word: enough. Depending on the context, it brings up so many things for a body and soul.

One of the first things that is on my mind is how easy it is to fall into negative self-talk. On Saturday I got dressed for the open house we hosted. Mister Soandso told me (and in a kind way, so no picking on him, okay?) that my shirt kept riding up in back and showing the waistband of my underwear. He was trying to let me know in case I wanted to wear something different or so I could be aware of it. (As an aside, is this an issue for any other short-waisted ladies out there? Holy whoa, I am so tired of my undies being taller than my pants. And yet, high waisted “mom-pants” are so not comfortable for me. Sigh.)

Anyhoo, he kindly tells me this and the first freaking thing out of my mouth is, and I quote, “I’m so fat nothing else fits!” WTF brain?!?! Didn’t we just talk about this? Didn’t we decide that thinking this kind of stuff is for the birds?

And yet, faced with a handful of words, my immediate reaction was to be defensive and to put myself down. BUT, BUT, BUT my smarter brain kicked in and told my stupid brain to shut the hell up. That was enough of that kind of talk. In other words, I reminded myself that I am not so fat but I am short waisted. And besides, who cares if people know I have underwear on? There are worse things, right?

Another thing I’ve been thinking about is about why women in this time worry about their size anyway. Like, when did this get to be a thing? Because if I was reclining about the place alá Ruben-times, I’d be thinking I was all that and a bag of chips, let me tell you.

I ran across something this morning and I think Naomi is on to something:

Now, I don’t want to get a bunch of grief about this, but I do want to just let those words roll around on our tongues for a bit. When someone is hungry long enough, they sure aren’t likely to make a big fuss about other, more theoretical things that might be taking place hundreds of miles away.

In fact, access to food has been used throughout time to control and manipulate populations. So it isn’t beyond the scope of possibility that by manipulating societal expectations to keep half of the world’s population busy thinking about what they last ate or will next eat, that population wouldn’t be as likely to notice what other stuff was going on.

I realize those above 2 paragraphs smack of tin-foil hats and other such things, but I do believe there is something to what Wolf wrote. Food is a huge issue all over the world. In times of scarcity, getting food is the number one issue a person focuses upon. In times of abundance, food becomes a way to commune, celebrate, and demonstrate wealth. And for the entirety of my life, food is a means of control.

I don’t know where I’m going with this, but it does make me want to go back and read up on all the revolutions over the years and see what role food played in how things turned out. And it also makes me do the “Oh hell no!” thing. Now, more than ever, I am determined to make sure my kids (all of them) know that their worth is not the summation of any numbers that can be applied to them, whether they are the numbers of their weight, IQ, bank balance, or number of cats. They are enough just as they are. 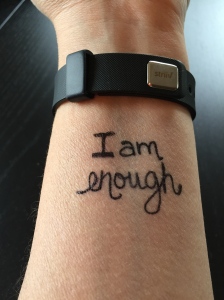 That’s it, really. Finding the way to enough.

When I read about elderly people dying with a smile on their face, I’m fairly certain they are leaving this place knowing that they have had enough. That they were enough in this time and place and now it is time to move on. That a life well-lived isn’t measured in days but in enough-ness.

I am, like seemingly freaking always, in a bit of a dark place – a rough spot between smooth skating. I figure most folks are like this, I just talk more about it. But that’s who I am – I am a verbal processor. Or, in the words of Mary Lambert (LOVE HER!) “I don’t care if the world knows what my secrets are”. I don’t mind saying I’m struggling because all these years of hiding later, I know I never hid it very well anyway.

Creative types struggle – balancing on the fine point of too much and not enough and right now, I’ve been falling into the pit of not enough more days than not. I was in that place again last night. I’m stuck with my writing – vacillating between giving up on a novel and embracing a new one. Dogged determination to “fix” one or find the joy of new characters, new worlds, new words? A good man and great guide, CC Finlay, kindly reminded me that good days will come again – the trick is remembering that and holding on until they get here.

Standing there in my kitchen, reading CC’s tweet, I visualized myself as a kid again. I had fallen off the balance beam and was hauling myself back up there. It seemed like about a mile off the mats where I had just fallen. The beam was so slick, the wood polished slick and familiar. A part of me wanted to just lie down on the mats again. But I got back up there – mostly to prove I could do it.

Today, I’m a long ways from that balance beam. But I’m hauling myself back up and hanging on. And I’m telling myself that I’m enough, just like this. Someday I may be more. But that doesn’t make me any less today. Today, I’m just different. And that’s enough for today.

5 thoughts on “Enough Is Enough”